Phillies, Food, and Some American History

This weekend was an exciting one! Friday, the manfriend and I finally celebrated his birthday. I took him to the Constitution Center in Philadelphia for the Bruce Springsteen exhibit From Asbury Park to the Promised Land: The Life and Music of Bruce Springsteen. The exhibit was awesome! I don’t know if it was just me, but I never really thought about Bruce’s career 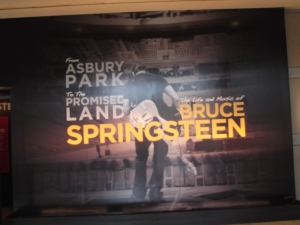 While the manfriend had done his prom at the Constitution Center, I had yet to visit it. We kind of explored the wrong way, starting at modern history and working our way back, but it was still an experience. The first room we went into was actually the signing of the Constitution, with life size (people were so much shorter back then) bronze statues of all the framers of the Constitution. This life size room is supposed to be the last thing a visitor sees. As we worked our way back from modern day to the past, we were able to decide a supreme court case, help a bill become a law, and even swear in as president. The walls are lined with video feeds, mini rooms depicting the time period, and alcoves you can walk into that trigger an audio. The Constitution Center is definitely something I’d recommend to visitors to Philadelphia.

After the Constitution Center we wandered down Market Street looking for a place to eat. I had heard about a place around Second and Market called Marmont Steak House. A little hole in the wall, it was a great place to have lunch. Outside they were advertising a $10 Cheesesteak, Frites, and Soda combo, and when asked about what they could do gluten-free, the girl outside said all of the sandwiches are gluten-free without the bread (duh!) and they would see what they could do about making some Frites. When we sat down, the waitress seemed pretty clueless about what was going on with their gluten-free options. However, what could have been a terrible experience was saved when the owner politely came over, introduced himself, and asked what we  were looking for. I explained that I had read on multiple reviews that they could make their Frites gluten-free, but the waitress was saying that everything was fried together, creating a cross contamination issue. Thankfully (because one of the reasons we had gravitated toward eating at Marmont Steak House was the Frites), the owner gave a small laugh and said something along the lines of “if we can’t do fries gluten-free, we have issues.” So the lunch was saved, the Frites were delicious, and I do have to say so was the margarita.

After Marmont Steak House we had some time to kill so we wandered down to Franklin’s Fountain. Located at 116 Market Street, Franklin’s Fountain is a throwback style ice-cream shoppe. All the people serving are dressed like its still the Revolutionary War Era and the ice cream is all hand made. I asked the woman behind the counter about gluten-free options,

and she told me that every flavor except for the Hydrox Cookies and Cream (Hydrox is basically an Oreo). They also said they could not guarantee that their seasonal flavor, which was a Honey Comb flavor this time, was gluten-free. I opted to have Teaberry, like the old gum flavor, with marshmallow. I got a “College Ice” which was one scoop with one topping; let me say that was the biggest one scoop of ice cream I’ve ever had. The manfriend indulged in a chocolate and peanut butter milkshake, which I unfortunately did not get to steal a sip of before he glutened the straw.

We wandered Old City Philadelphia for a while before heading over to the sports complex area. We got to the stadiums early so we could check out the new XFINITY Live!. It is just absolutely incredible in there. We didn’t stay to eat or drink, but we did go into each bar. Broadstreet Bullies Pub was my favorite. The old Flyers memorabilia just gave the pub an amazing feel. PBR Bar and Grill, Professional Bull Riding, not Pabst Blue Ribbon, is somewhere I would like to go for a night out. There’s a mechanical bull! Gluten Free Philly did a review of all of the bars in XFINITY Live! and what they will be offering gluten-free.

XFINITY! Live was followed by a Phillies vs. Mets game. What should have been an easy win was a very disappointing loss. Cliff Lee blew 3 runs in the first inning, and the Phillies were just unable to recover. Fortunately the game was quick and we were able to make our way into McFadden’s in the ballpark to catch the end of the Flyers game. Tied 5-5 when we started watching the FlyGuys won it 8-5!

Despite the disappointing Phillies loss, our excursion into Philadelphia was an amazing day. Good gluten-free food, good ice cream, and good sports….does it get any better?

I am a recently diagnosed Celiac living in Glassboro, NJ. I am attending Rowan University for Law and Justice with a minor in Psychology.
View all posts by ellenensminger →
This entry was posted in Beer, Cider, and other Gluten-Free Drinks, Dining, Pictures and tagged baseball, celiac disease, Franklin Fountain, gluten free, gluten free dining, gluten free restaurants, Marmont Steak House, Phillies, XFINITY Live!. Bookmark the permalink.

1 Response to Phillies, Food, and Some American History